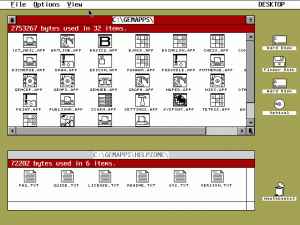 OpenGEM is a non-multitasking 16-bit graphical user interface (GUI) for DOS. It is an extended distribution of FreeGEM that includes features of the original Digital Research GEM.

OpenGEM is intended to provide a simple to install and use GUI system and windowing framework for the FreeDOS operating system.

OpenGEM was developed by Shane Coughlan in collaboration with the FreeGEM Developer team, and is free software released under the terms of the GNU General Public License (GPL). OpenGEM can be found on GitHub and on the FreeDOS website.

OpenGEM is feature-complete as a basic GUI and includes an SDK for future third party development or extension.

Theme by Anders Norén — Up ↑